Summer is just around the corner! The thought of long summer days filled with friends and family gathering together, weekend barbecues, relaxing poolside, bike riding and gardening is what motivates me after a long Chicago winter.

The time has come when FONA is preparing the garden plots for the 2013 gardening season. I love taking advantage of the FONA garden, especially since my only gardening space at home is limited to my tiny 3rd floor balcony.

One of my favorite veggies to plant is peppers. Poblanos are great because they are so versatile and flavorful and can be used in so many different recipes. Home grown poblano peppers are even better. They have much more flavor than a green bell pepper and just a little bite (less than a jalapeno).  They also have a slightly smoky flavor when roasted. They can be used to replace green bell peppers in many recipes such as pepper steak, fajitas, omelets and stuffed peppers.

A well-known recipe using poblanos are chile rellenos which is a poblano pepper stuffed with cheese, coated in whipped egg and then deep fried. Poblanos are also used in soups and sauces, such as mole and salsa.

If you end up with more home grown poblanos then you know what to do with at the end of the season you can even dry them. The dried version of the pobalno is called the ancho pepper.  Anchos have a deep red color and wrinkled skin. They are sweet and smoky with a slight raisin note. Anchos are commonly used to make mole or enchilada sauce.

Here is one of my favorite recipes using poblano peppers. This is a great recipe to bring as a side dish to a summer barbecue. I found this recipe on Betterrecipes.com. 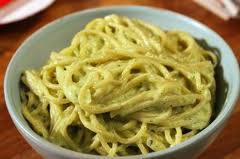 Roast the poblano peppers in the oven: Heat oven to 450°F. Place the poblano peppers on a foil lined baking sheet and bake until skin blisters and begins to darken, about 8-10 minutes. Remove from oven and place peppers inside a plastic bag so they can "sweat." Then you can remove the skin easier (about 8 minutes in bag). Use plastic gloves to peel and remove the seeds and veins from the peppers.

Blend the roasted flesh of the peppers, garlic, bouillon, cilantro, black pepper, sour cream and water until it is a creamy green sauce. Pour the sauce in a saucepan and cook over low heat until it starts to boil.

Add the spaghetti and let it all simmer for 2 to 3 minutes. Make sure all the noodles are covered by the sauce- use the 1/2 c. of milk (more or less) to get the desired consistency of sauce you like. It should be creamy, not soupy, or too thick. Garnish with fresh cilantro and your favorite shredded cheese. Video: Why Flavor? – 7 Reasons Flavor is Essential in Your Product