Vanilla. Access to the beloved ingredient is facing some obstacles. A combination of factors has created the perfect storm when it comes to sourcing vanilla —knocking supply and demand completely out of whack. Yet, the move to clean label —and therefore, natural vanilla—marches on.

How can product developers keep their consumers happy, meet their label requirements and still maintain amazing taste? Let’s take a look at vanilla, from the driving forces in play, to considerations and solutions. 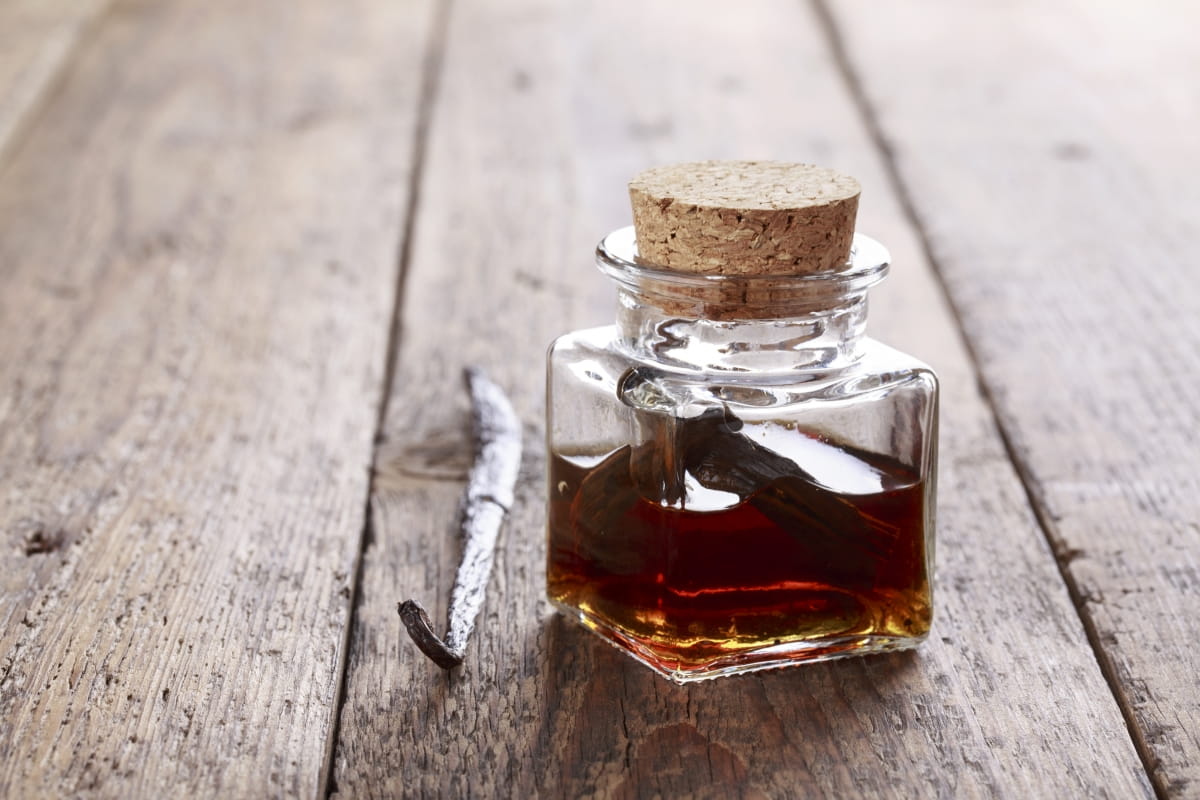 It’s possible that naturally sourced vanilla has never been more popular, nor supplies of the favorite ingredient more expensive. The market is concentrated on Bourbon vanilla, with 80-85% of it grown in Madagascar. Today’s yearly demand is 3,200 metric tons —but there are only 2,000 metric tons estimated available from the island nation. The world’s speculative buffer stocks have been exhausted since 2016. How did we get here? This imbalance has its roots in historical elements, and the situation was building well before Cycle Enawo hit Madagascar in March 2017.

In April 2000, Cyclone Hudah destroyed more than 20% of Madagascar’s vanilla plants and beans. As a result, other countries (Indonesia, Uganda, India and Papua New Guinea) stepped up their growth of vanilla. Meanwhile, many CPG companies started reformulating their products to blend vanilla extracts with other natural flavors, reducing their cost as well as demand for vanilla. By 2008-2009, there was an abundance of vanilla stock and prices were very low. As farmers’ incomes dropped severely, a living wage came harder to earn. Producer countries moved on to more profitable crops and by 2013, the production of vanilla was once again centralized to Madagascar.

By 2013, low prices (and therefore low wages) meant that other countries had walked away from vanilla production. Even within Madagascar, many farmers had moved on to other crops. Around this time, the clean label movement begins to reach a fever pitch. By 2014, 62% of people also said they preferred foods that were “minimally processed,” according to NMI. Between 2006 and 2014, there was a 61% increase in the number of people looking for foods and beverages with “a short list of recognizable ingredients.”

As clean label took off, large food and beverage companies began to take notice. In 2015: Nestlé, Kraft, General Mills, Kellogg’s, Hershey’s and even fast food chains like Taco Bell and Pizza Hut began removing artificial ingredients from their products. This had a dramatic impact on the vanilla market, and the stores of speculative vanilla began to get chipped away. In 2016, they were gone. A kilogram of cured black vanilla beans cost $30 pre-2013 and by 2016 cost $250-500. 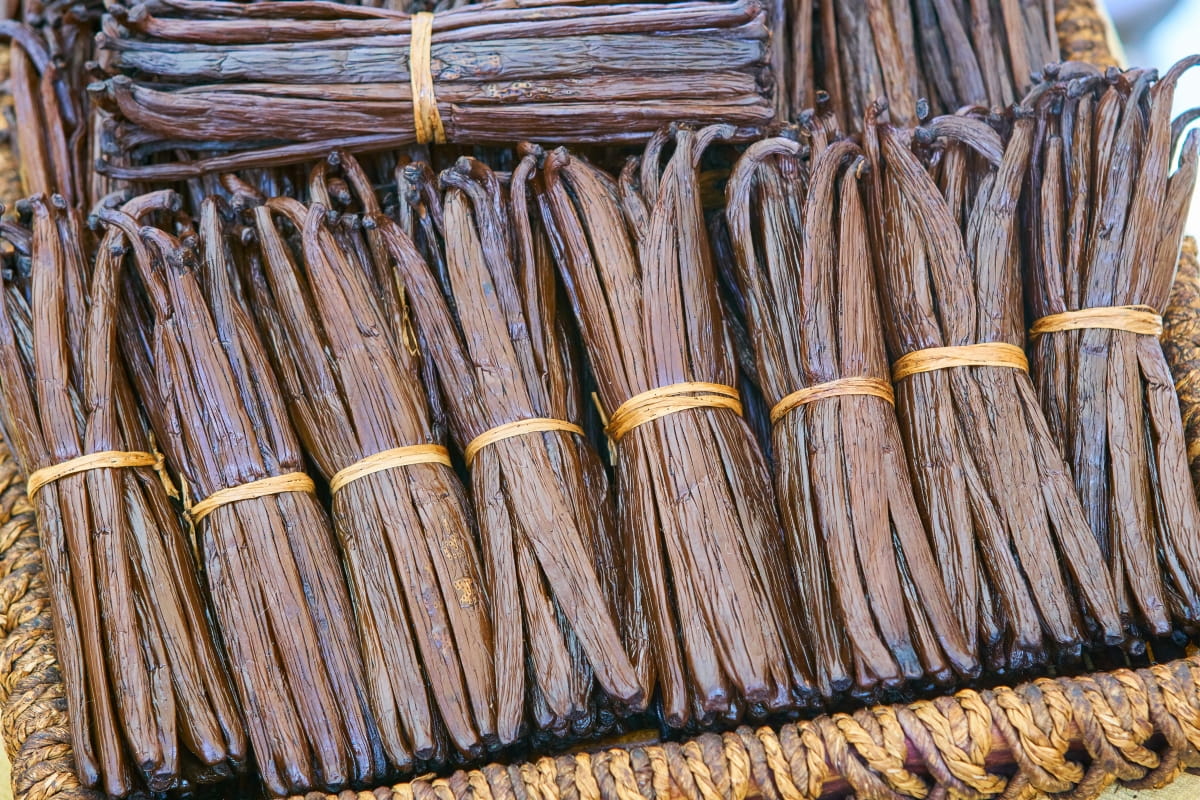 While wages were low, quality care of the vines and beans had decreased, leading to low yield. As clean label amped up, demand increased. Vanilla crops were subject to theft, and farmers had new incentive to bring the crop to market early.

Typically, vanilla goes through a 10-16 month process from blossom to being ready for shipment Scientific American notes that it takes 600 hand-pollinated blossoms to produce 1 kg of cured beans. While still green, beans are picked and then sold to fermentation locations. There, the beans get sorted, blanched, steamed and dried in the sun. Afterwards, they are sorted again, dried again and fermented. All the while, beans are checked by workers for aroma and quality.

Often, one season is being dried, sorted and conditioned while another is blossoming and being pollinated. It’s a labor-intensive process and a time-sensitive one: the window to hand pollinate the beans is only 1-2 days.

Adding to this: vanilla orchids take a long time to blossom. It takes three to four years for a new vanilla plant to produce flowers (which turn into beans). So vanilla planted today won’t even be pollinated for several years.

The Pressure
By 2016, vanilla was suddenly very valuable again, and farmers struggled to protect their crops from outside forces. Buyers also put the pressure on, hoping to capitalize on the high prices themselves. Farmers began to take some shortcuts. One current practice especially contributes to low yields, as farmers harvest their crops early and store the still-wet beans it in plastic bags.

Harvesting early leads to low quality in and of itself — but the act of hoarding wet beans in plastic bags is severely detrimental to the process. The beans don’t get to ripen, ferment and dry, and the aromatic quality suffers. Often the beans then are processed from the start again, adding even more labor costs. The quality never recovers fully.

Traditional curing ratios are around 5.5 kg of green vanilla beans for 1kg of cured (black) beans. By 2016, it took around 8kg of green beans to 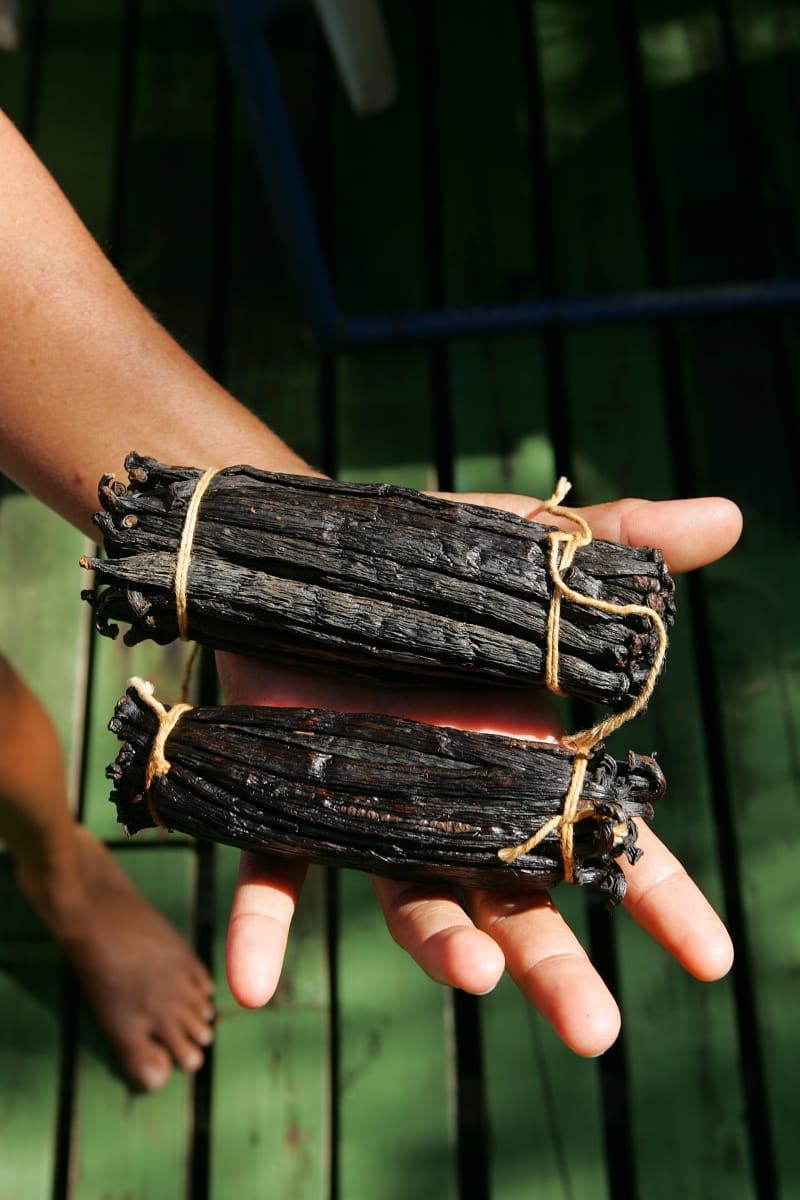 By the end of 2016, hopes were high within the food industry for Madagascar’s 2017 crop. Eurovanille noted in a November 2016 report that “flowering is plentiful for the current season which is a good sign of a large harvest in 2017. The price induced drop in demand coupled with strong supply will inevitably lead to a sharp drop in price.”

It was not to be. On March 7, 2017, Cycle Enawo made landfall in Madagascar. It was the strongest cyclone to hit the island in 13 years. At least 81 people were killed and nearly half a million people impacted. According to the United Nations, 15 out of 31 municipalities on the island were severely impacted, and transport remained a huge problem for months following the storm. “Non-mature vanilla has been stolen,” the UN reported, adding that the price of food staples was increasing. Economic losses were estimated at $400 million, 4% of Madagascar’s GDP. The lives and livelihoods of the farmers and workers have suffered incredibly, and their minds certainly are on more important matters than the cost of vanilla beans.

While Madagascar works to rebuild, the true impact on the vanilla market is not yet known. The cyclone hit as the vanilla crop was flowering, and as we noted earlier, it takes 3-4 years for newly planted vanilla orchids to be harvestable. It’s safe to assume that the supply of bourbon vanilla will remain low — and costs high — for some time to come.

When approaching vanilla, it’s important to know the forces at work behind the options and potential solutions. In the U.S., vanilla has gone under detailed regulations since the 1970s. A great deal of back-and-forth for decades has looped in the FDA, TTB, FEMA and food companies. It all leads to an environment where the vanilla industry itself and products that “contain vanilla” are under a microscope. Visibility is high and consumers deserve honesty, and they deserve to get the taste they expect. It’s more crucial than ever to make sure your package claims are truthful and not misleading.

During product development, each of these can be adjusted to get to a preferred product label that fits cost, availability and other concerns:

Let’s look at some of the considerations that are most important:

• What’s the ingredient declaration on the information panel?

• What’s on the front of the package (Principal Display Panel or PDP)?

• What other labeling do you have?

The answers to these questions truly determine your options. Opportunities moving forward depend on a host of factors. Any flexibility in one area or possible adjustments open up a new path with new options — and new trade-offs. For example, do you want vanilla on the PDP? You MUST have a vanilla sourced ingredient in your product if you don’t want “artificially flavored” on the PDP. Your options can be anything from removing the product to maintaining a taste profile with alternatives. Is there flexibility with your label? Your taste profile? Your ingredient list? Your budget? All of these are essential considerations to move forward.

Bourbon is by far the most popular type of vanilla, balancing woody, powdery, tea and caramelized taste perceptions. As you can see in the charts located in our full report (linked below), other vanillas have different characteristics. But they may be options to explore if you can’t afford — or just can’t get—a large quantity of bourbon vanilla. To maintain the preferred taste of bourbon, it may require “building back” the preferred characteristics of bourbon, and using bourbon extenders and boosters. Tahitian vanilla is often cost prohibitive but perhaps might be the right solution for your product.

More on different vanilla profiles in our FULL REPORT HERE. 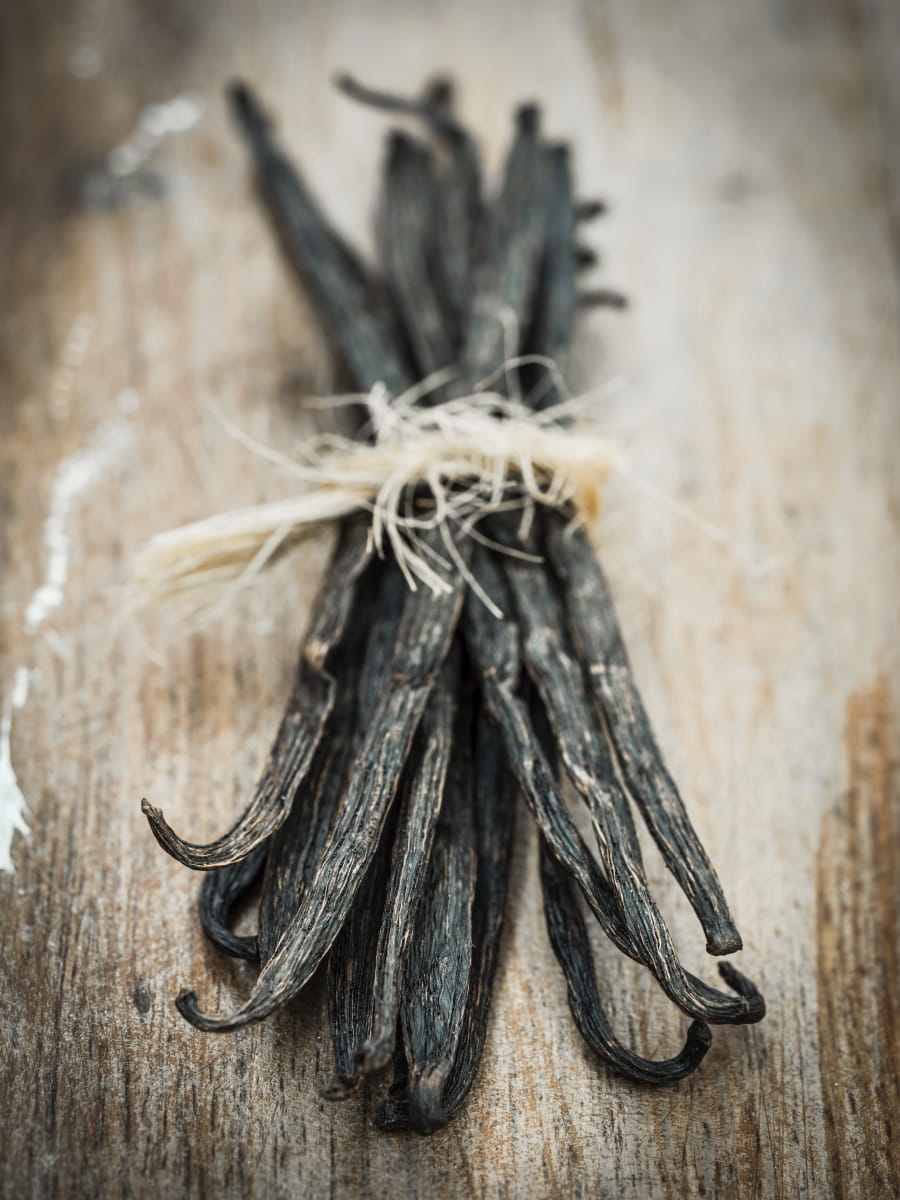 So, vanilla is impacting your product and your business. Now what? First: take a step back. Examine your portfolio from the ground up, prioritize any renovation, and explore all labeling options available. Testing, screening and timing are all important pieces of the puzzle as well. The good news? FONA can do the heavy lifting.

We know what you’re going through, and we have a plan.

You deserve to partner with FONA.

You need the perfect flavor that fits your label and consumer. Consider us an extension of your team. We will develop a plan that suits YOU, and provide options such as maintaining the existing label with extenders or finding acceptable alternatives. And all while fitting your high-reg needs.

Dare to be different, and stay ahead. We get it — you need to maintain your competitive edge and avoid passing on high costs to your consumer. Attacking vanilla early, and thinking about it from a NEW angle. That’s how you can lead.

Build for the future. Vanilla is challenged in the short AND long-term. Our technical expertise and collaborative approach allows you to build replacer tools and plans for the fluctuating vanilla market today and tomorrow. Let’s think about the big picture, together.