It’s a space that is changing every day – and so far developers and brands are only scratching the surface when it comes to product launches and tasty innovation. In this, part 1 of our three-part deep dive into plant-based food and beverage, we’re highlighting the two distinct paths in the space and exploring a world of opportunity that is flavorful, vibrant, ever-expanding and deserves attention. What type of plant-based products are best suited for your brand, and where will the future take you? Read on, and check out part 2 here. 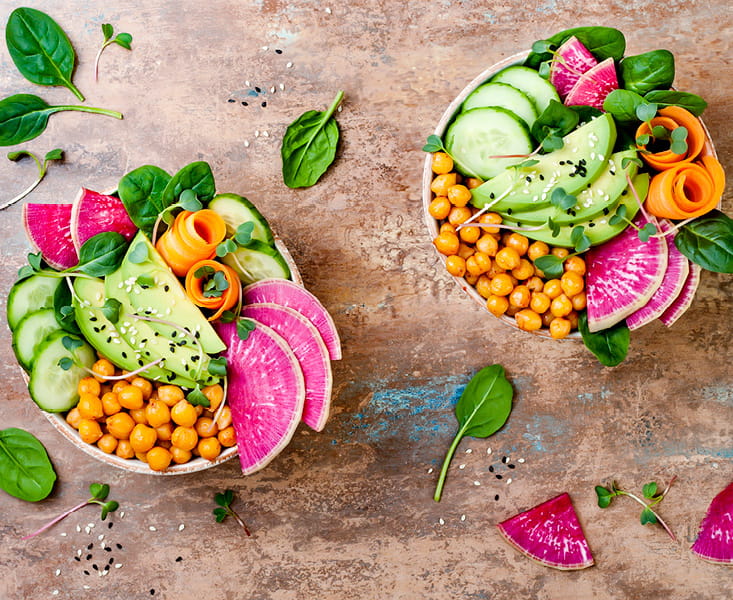 PLANT-BASED FOODS TAKE OFF AND BRANCH OUT

Peeling back those numbers a bit to get to the core of what’s going on in plant-based, growth is stemming from what we’ve identified as two product types. First are the foods and beverages consumed as replacements for meat, dairy, eggs and additional animal-protein sources. Secondly are those that shine in their own right, like veg-centric products and dishes. Understanding the opportunities in both varieties is the key to future development.

“Broad opportunities remain to create more packaged food and drink with fruits, vegetables, grains, seeds, spices, herbs, botanicals and other plant-based ingredients to provide consumers with products they perceive to be tasty and healthy.”
- Power to the Plants, Mintel

As we see across all food and beverage categories, taste is the top reason cited by consumers for eating plant-based products, followed by health, the environment, animal protection and concerns over diet. There is some room for improvement in taste, at least according to the 50% of consumers who told Mintel researchers that they believe plant-based foods need a greater variety of flavors.

As Daniel Vennard of Better Buying Lab, World Resources Institute says, encouraging a new type of plant-based eating: “Make this party sound even better than the other party.” In other words, provide the unique tastes and positioning to make plant-based products stand out to consumers.

This is not the vegetarianism of the past. It isn’t even about being about a vegetarian, although those consumers are under the broad umbrella of plant-based eating, along with vegans, and, arguably the most common type of today’s plant-based consumer flexitarians. According to IFIC, only 4% of consumers say they are vegetarian or vegans, but many others report they are following diets high in plant-foods, including paleo (7%), low-carb (5%), Whole30 (5%) and high protein (4%) diets.

The term “plant-based” is deliberately broad in scope. As the Washington Post puts it “ there are plenty of cultural underpinnings for the plant-based explosion... few are more powerful than the phrase itself.” Breaking it down in an English-class kind of way, the “plant” part throws the category open to essentially anything made from a plant that grows in the ground, while the “based” part kicks casts a net across a world of flavor and format options. A plant-based food can be complemented by a particular flavor, or, perhaps, defined by it. Considering consumers’ quest for clean label and inherently “natural” foods, it’s no surprise that plant-based positioning comes with a perceived healthy halo.

"Plant-based is as close as you can get to the farm. It’s a really smart use of terminology."

80% of consumers say they prefer the term “PLANT-BASED” over “VEGAN” when it comes to foods that avoid meat, dairy or any animal products. Source: Food Navigator

PLANT-BASED RELEASES: Between 2014 and 2018, there was 95% growth in plant-based food and beverage product releases.

Research into social media mentions reveals huge growth in the adoption of “plant-based” across the broader population. In fact, there was 234% growth between January 2016 and January 2019. Digging deeper, 73% of those posts are from a female demographic, and the sentiment is overwhelmingly positive. 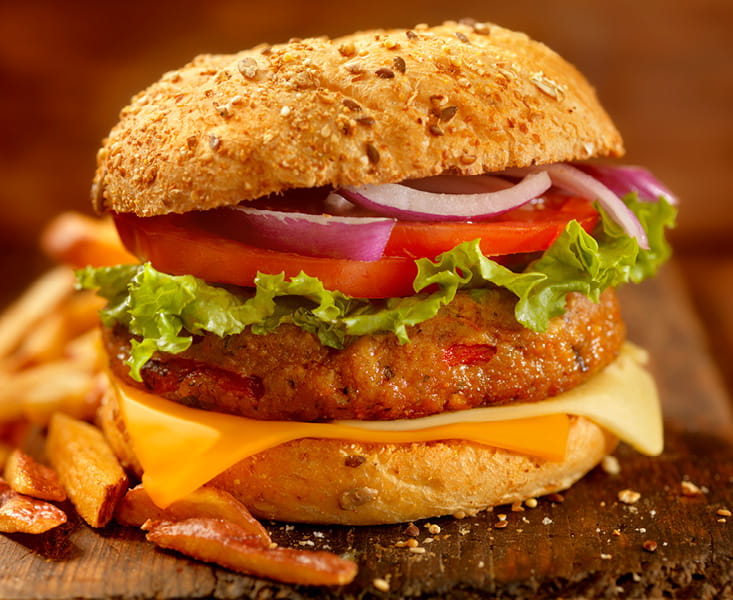 IMITATION IS THE BEST FORM OF FLATTERY

“Faux” was a big term years ago, when meatless burgers first came on the scene. Consumers are still keen on alternatives to traditional proteins or other non-plant-based foods, but it’s less about pure substitutions and more about substance and sustenance, reflecting the widening of the plant-based consumer beyond vegans and vegetarians.

(Non) Meat of the Matter
One case in point: the meat case. Sales of plant-based meat alternatives rose 24% in the past year. The pendulum is wobbling, too: 60% of respondents polled about their eating habits reported that they are cutting back on meat-based products. Many of the plant-based meat replacements gaining traction are praised for how closely they look and taste like their animal protein counterparts.

Burger Bounty
As rising brands like Beyond Meat and Impossible Burger show, plant-based burgers continue to make inroads, both at retail and foodservice. Part of the growing appeal of plant-based burgers is the flavor and meat-like taste, mouthfeel and appearance, which comes from burgers made from ingredients like soy, nuts, beans and other ingredients. You may not need the ketchup with these patties, thanks to the flavor additions like jalapeno and chili peppers or tomato and basil.

You Can Be A Real Jerky

Thanks to the trending keto and paleo diets, meat snacks are more popular than ever. The emergence of plant-based meat snacks is a nod to the “gathering” part of humankind’s hunting and gathering history.

Smoky flavors are still a part of plant-based jerky, but the nature of plant-based dried meat snacks have spurred innovations, in flavor and format as well as in product packaging and marketing.

Plant-based proteins are often subbed in for animal-based proteins in traditional categories like meat, dairy and eggs, but they are also popping up in other types of foods, especially as low-carb diets remain popular. While the alternative scene is thriving in plant-based sector, so are plant-based foods and beverages developed and marketed as distinct in their own right.

"Alternatives are all well and good: fish alternatives, meat alternatives, But I think now cuisine-based dishes that only use vegetables in different and interesting ways (will shape the market)…That is where we are going to see more innovation... Raising the status of certain vegetables and making them exciting."

Plant-Based On Your doorstep

Special delivery: In a mashup of meal kits and plant-based trends, Purple Carrot is a meat kit company specializing in deliveries of plant-based meals like BBQ Jackfruit with green chile polenta and collard apple slaw.

Some meat companies have seen plant-based coming and would rather add these items to their roster rather than fight the umami tsunami. Tyson Foods, for instance, announced a new Green Street brand that includes plant-based protein bowls made with chickpeas, lentils and quinoa, among other plant foods.

Plant Protein as the Snack Star


Potatoes aren’t the only plants being used to make salty chips: everything from coconut and apples to cassava root and lentils are the star of the crunchy snacks. Other packaged snacks are made entirely from plants: check out our recent report on snacking trends for examples like snack packs of snap peas.

A Base to Showcase


Some plants are better than others as bases for flavors to shine through and for a dish to stand on its own. Take cauliflower, for instance: this versatile vegetable has a basic color and taste that takes on the flavor of the accompanying seasonings or flavor additions. That base makes this veg a popular choice for pizza crusts and riced salads. The same is true for the humble sweet potato, which is becoming a center-of the-plate item, thanks go conveniently-packaged cubes and noodle-like forms of the tuber.

Fielding Off The Competitors

Both replacements and plant-original dishes are being worked into traditional food and beverage channels, from supermarkets to fast-food restaurants, as a way to maintain their competitive edge.

To meet the appetite for plant-based foods, QSR chains are growing their menus: Carl’s Jr. is selling Beyond Burger and White Castle announced it would offer the Impossible Burger. High end restaurants and mid-sized eateries alike have added plant-based menu items that go beyond basic salads and simple substitutions. Last year, Starbucks announced a greater focus on plant-based drinks and plant-based proteins on its menu, like the new Iced Vanilla Bean Coconut Latte and Protein Blended Cold Brew, among others.

Consumer interest in plant-based products is already huge – and getting bigger. Is your particular consumer look for meat-mocking (or dairy mocking) options? Or are they more interested in simply consuming more plants in their day-to-day, along the lines of a flexitarian? Several, if not most, of the 2019 food and drink predictions across the industry named plant-based eating as a notable and likely permanent shift. Across the plant-based spectrum, flavor is a key differentiator, from masking inherent bitterness to enhancing existing flavors to building on neutral flavors of the respective plant. Even more exciting: we’re only in the spring season of this burgeoning market.

From concept to manufacturing, we’re here for you — every step of the way. Contact our sales service department at 630.578.8600 to request a flavor sample or chat us up at www.fona.com/contact-fona/