Aloe - Not Just for Sunburns Anymore

Often called the ‘miracle plant,’ aloe has been attracting increased attention during the past couple years. Once given as a burial gift to deceased pharaohs, in current times aloe has numerous uses, but in recent history has been primarily seen in sunscreens and lotions as well as applied topically to heal cuts and burns.

Aloe is said to promote the healing of bones and joints, aid in digestion, improve circulation and strengthen the immune system. There are more than 400 species of aloe, but it is the Aloe Barbadensis Miller (Aloe Vera or “true aloe”) that has been the most useful to humans due to its medicinal properties. A popular house plant, Aloe Vera contains over 20 essential minerals and provides 20 of the 22 amino acids required by humans, including 7 of the 8 essential amino acids which are not produced by the body.

Besides trending in North America, aloe as both a flavor and an ingredient is popping up worldwide, notably in Asia Pacific and Europe. With such an increasing presence of aloe in North America, it seems that consumers are willing to explore new, more unique flavors in their foods and beverages.

Aloe’s swift entrance into the food and beverage categories over the past couple of years is remarkable!  Many of the recent aloe drink introductions have been blended with other flavors such as coconut or pomegranate, which may serve to both extend aloe’s audience and reduce the knowledge barrier surrounding the flavor. New products of note include Tropical Food World’s Aloe Vera Mango Juice Drink and Chimex Produce’s Visvita Pomegranate Flavored Aloe Vera Juice Drink. Bacardi Torched Cherry Flavored Liquor, infused with torched plant aloe, is also a product to note. Aloe has been spotted on menus as well, including Lollicup Coffee and Tea’s Honey Black Tea with Aloe. 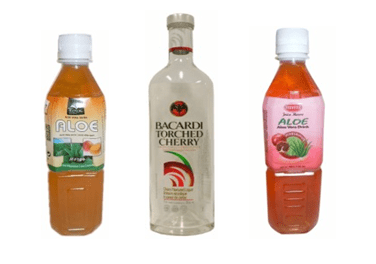